Two female pit bulls were abandoned in and were found by deputies frightened and panicked in the middle of a busy intersection. 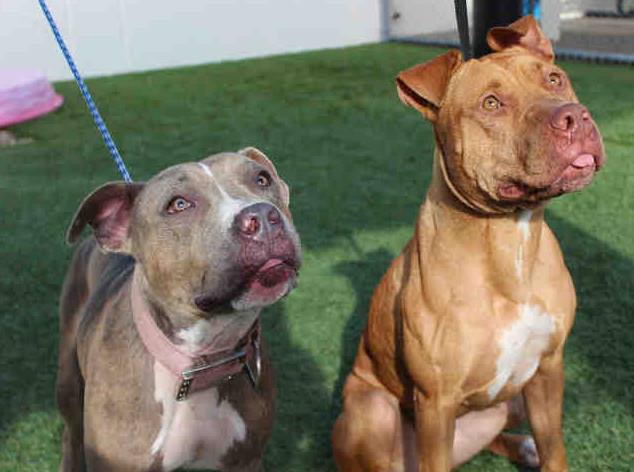 Having compassion for the animals, the deputies went into action to help the dogs.

They noticed how sweet-natured both dogs were once they approached the shaking pups.

A call was dispatched to animal control, and both deputies waited right by both of the dogs’ side while comforting them until the animal control vehicle arrived.

Both of the pit bulls warmed right up to the deputies immediately.

While they waited, one deputy saw that one of the dog’s paws were bleeding heavily and was injured.

He administered first aid to the paw carefully wrapping it in gauze.

The scared pit bulls sensed that the deputies were there to help.

The love for animals was evident in the deputy’s display of caring for the injured dog as well as both of them standing with the dogs until animal control got there.

This act of kindness certainly merits attention which it did as the story went viral through social media, TV, and the newspaper.

Once animal control got the pups settled in at the shelter, they were given a warm bed, food, and water.

These sweet pit bulls were given the names “Liberty” and “Justice.”

They were put up for adoption, and it was not long after that they found a fur-ever home!

Thank you, Deputies, for your act of compassion and kindness to these animals and for not turning a blindeye to a plight of two helpless pups.