We have all gazed at a “Beware of Dog” sign carefully placed on a fence or gate and wondered about the ferocious beast that must be lurking nearby.

Many cities and towns across the country require these signs to be placed, in clear view, if you own a dog.

Some areas only require the sign if you own a particular dog breed (i.e. German Shepherds, Pitbulls, or Mastiffs).

However, the following are 14 “Beware of Dog” signs that seem to be warning the public of cuteness overload as opposed to a wild beast.

Two aggressive looking dogs accompany this sign’s message of warning, showing their pearly whites and in an attack stance.

However, the two dogs that “guard” this territory are none other than two adorable Pomeranians.

The only thing that should “beware” in this yard are people with dog grooming supplies! 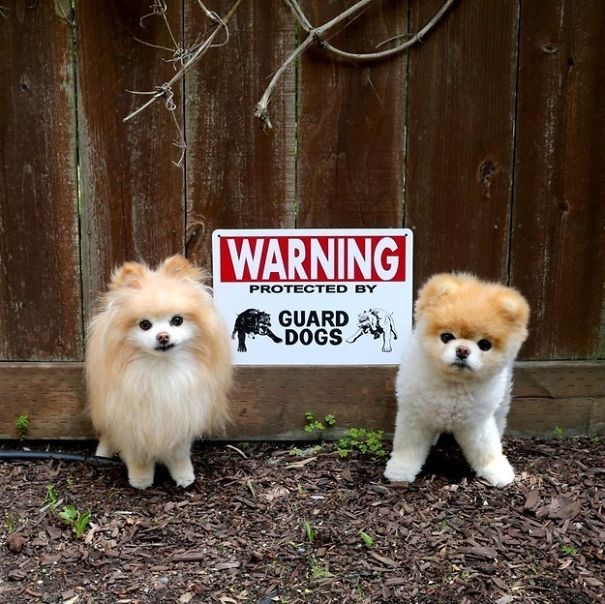 The second “Beware of Dog” sign states just that and is accompanied by a silhouette picture of a dog in “alert” mode.

However, the ball of fluff holding the sign appears to be a young Golden Retriever or Yellow Labrador puppy.

Now, he may grow into a wonderful watchdog for his home, but for now, he is just going to attack you with cuteness and kisses! 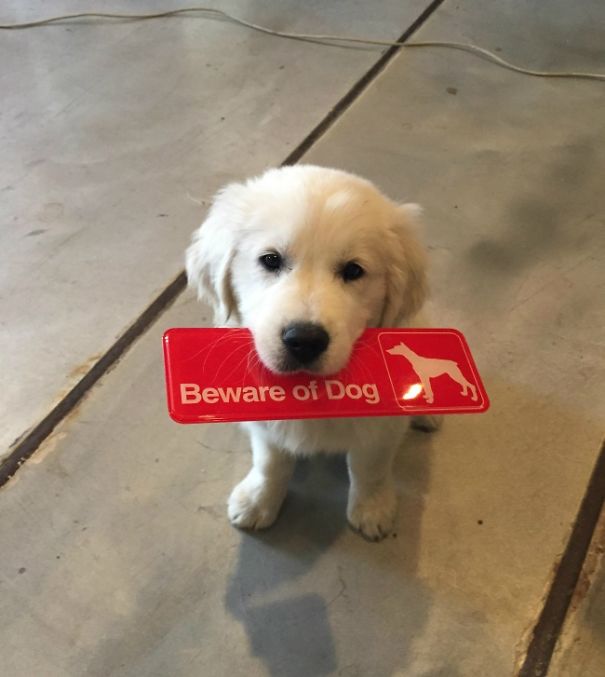 This sign is likely meant to be more humorous than it is a firm warning.

It states “Death from the ankles down” and pictures the silhouette of a Dachshund.

Next, to the sign stands a Dachshund dog with sweet and lovable eyes. The only thing shaking in this yard are the fallen leaves.

RELATED:  Pug puts everyone on notice when he’s in the driver’s seat! 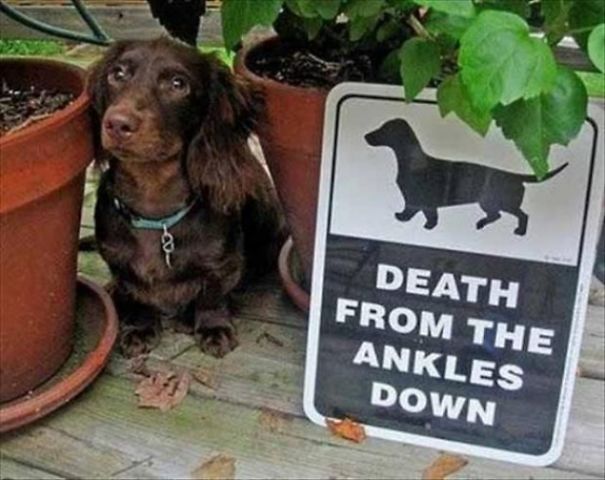 This “Beware of Dog” sign even includes a picture of a snarling, aggressive looking dog.

The dog on the sign is clearly ferocious and ready to attack with his teeth out.

However, a gentle giant stands behind the sign, his eyes are soft and calming, his tongue is out, and his paws are resting on the top of the gate.

This dog seems to be in desperate need of affection as opposed to thirsty for blood. 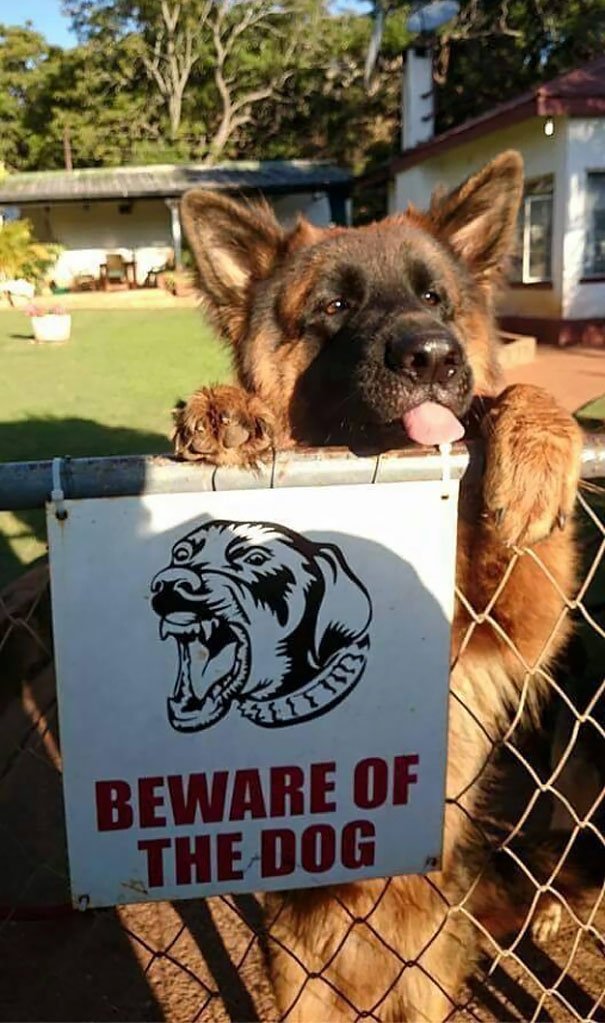 The pooch in the next picture looks like the fluffy puppy all grown up!

This dog’s sign is different than the others as it is breed specific and it does not picture a ferocious snarling dog.

Instead, the sign reads “Beware! Guard Golden Retriever on duty.”

However, the pup appears to be in his owner’s kitchen and is sporting a huge doggie grin. The only thing he is guarding in there is the food! 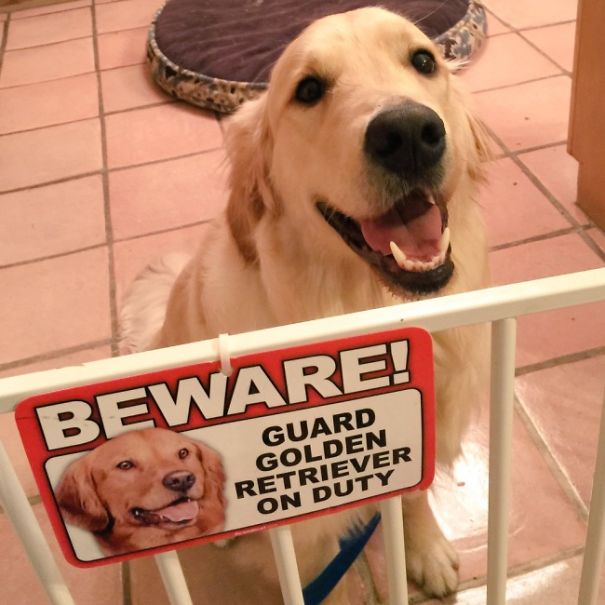 The next ferocious beast to “beware” of appears to be a fluffy Husky or Husky mix dog. His sign prominently states “Beware of the dog.”

However, if you look into this pup’s eyes, you will see that he is nothing to be feared and is looking for a new friend!

The dog in the next picture has an owner that not only want to warn others of him but also make sure they know him by name!

This dog seems to be a Basset Hound, and his sign is not placed on a fence or gate.

Instead, it is in the form of a small doormat which reads “Beware of Joey!” Joey doesn’t seem as ferocious as he does embarrassed by his rug.

RELATED:  A Pit Bull’s Sweet Soul Shines Through Her Smile! 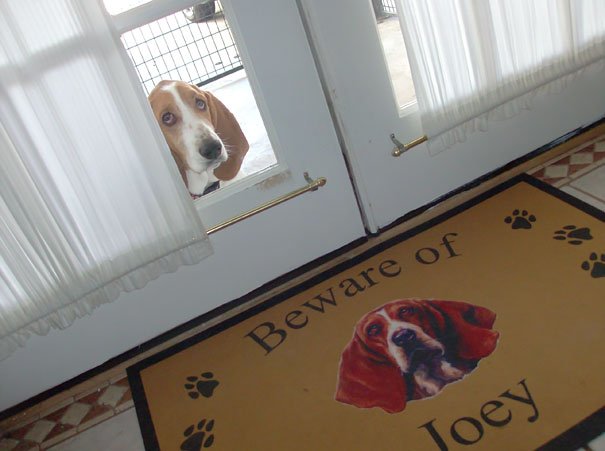 The next “Beware of Dog” sign is securely placed on a fence as it should be.

Upon observation, the fence is very thin and appears to be flimsy. Whoever lives here could likely get out!

Unless of course, the warning sign is talking about the tiny ball of white fur at the bottom of the picture, in which case, people should beware! Beware of your heart being stolen! 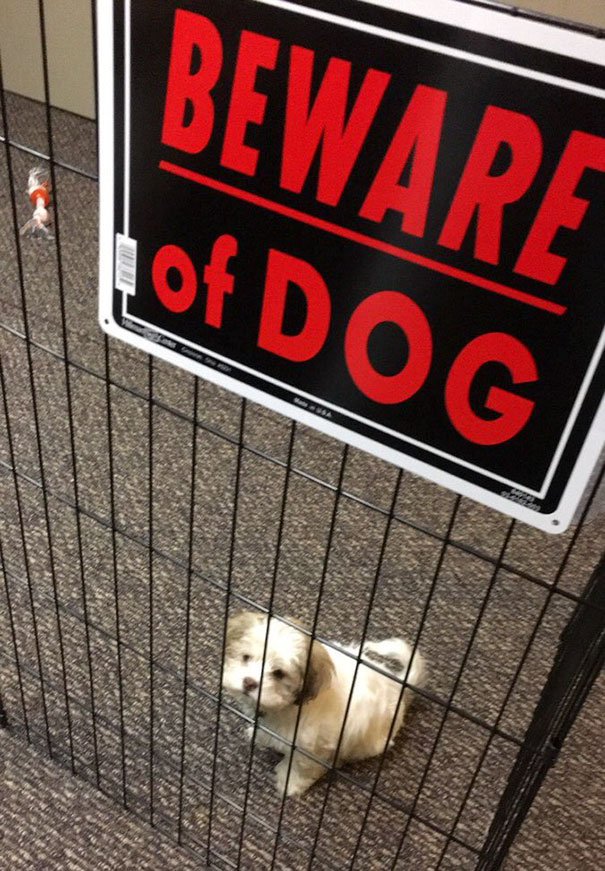 The two German Shepherds in the next picture must be dangerous as their fence has two signs!

One of them sporting the normal “Beware of Dog” message and the other which is hopefully meant to be humorous.

It reads “No Trespassing! We’re tired of hiding the bodies!”

However, the dogs behind the fence seem like they are waiting for someone to throw them a stick to fetch as opposed to awaiting a trespasser to…hide. 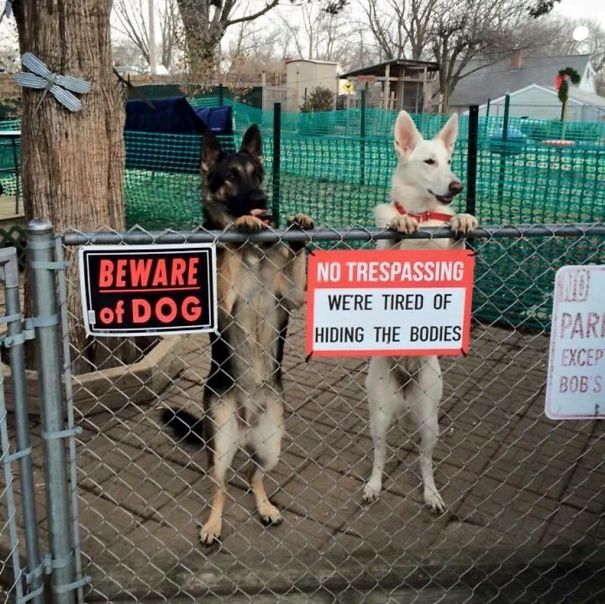 The following sign signals to people that the dog that lives there is a “bad dog.”

The dog on the sign appears to be some sort of Pitbull with a large collar.

Upon closer observation, a tiny Chihuahua looking dog can be seen in the corner of the fence. Yes, even he could be a bad dog! 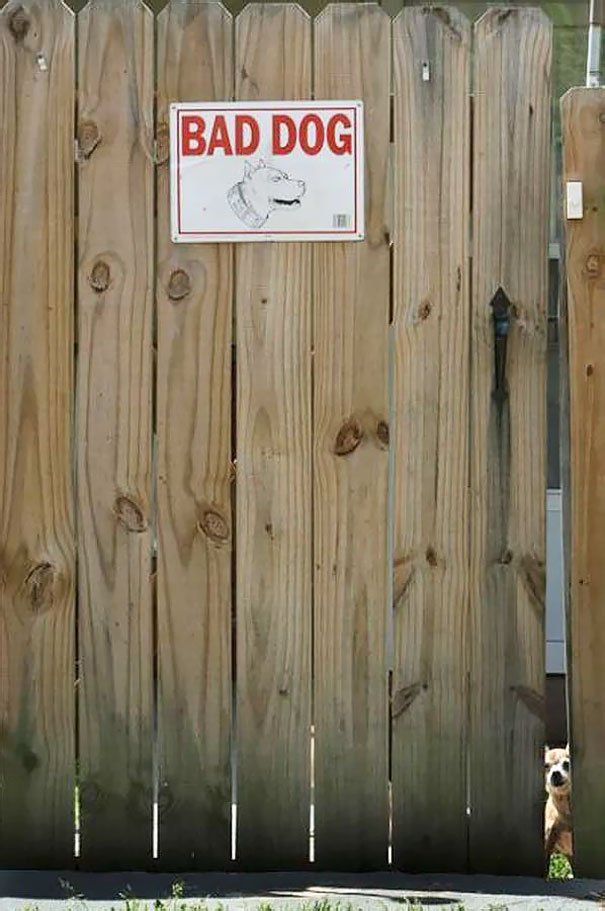 Now, the next sign is very similar to the rest in that it is securely fixed to the fence and states “Beware of the dog.”

However, the pup in the picture looks like he has some growing to do before he can stop an intruder. 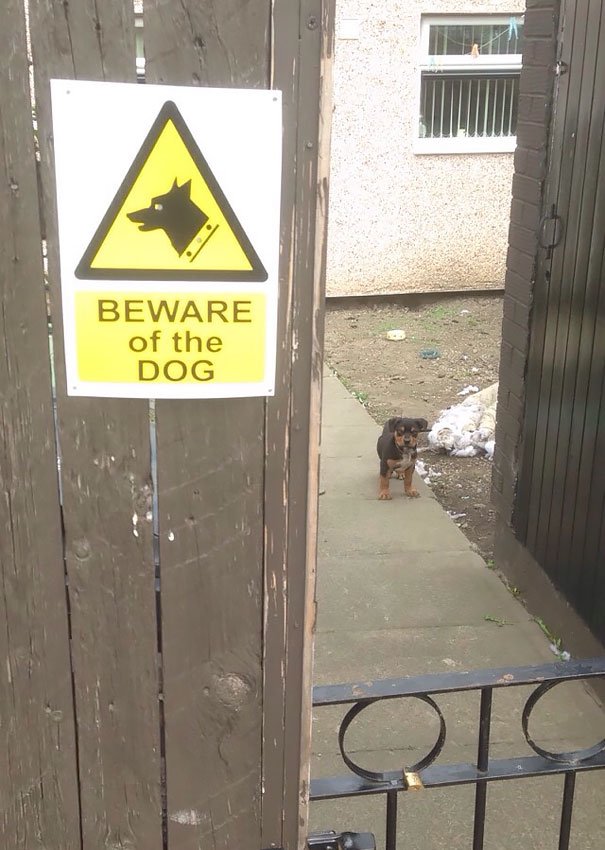 The dog in the next picture appears to be a member of the Bully Breed dog group which means that his owners were likely following town laws when they installed his sign.

RELATED:  The Best Cozy and Comfortable Beds for Your Dog!

The sign on his fence reads “Beware of the Dog. Enter at your own risk.”

Looking into this old timer’s face, you can clearly see that his defend and protect days are behind him (if he ever had them to begin with).

After all, with a sweet face like that, who could be intimidated? 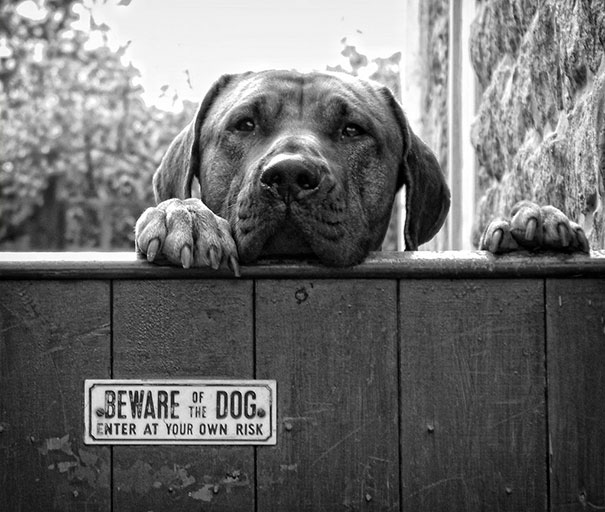 The next picture takes the cake!

The owners of this pooch seem to have a very good reason for installing their “Beware of the dog” sign.

Their dog appears to be extra skilled at jumping his large wood fence, which should be warning enough.

However, upon closer observation of the photo one may notice the bloody hand prints on the wooden pallets.

Neighbors and passersby must be hoping those handprints were placed there as a joke. 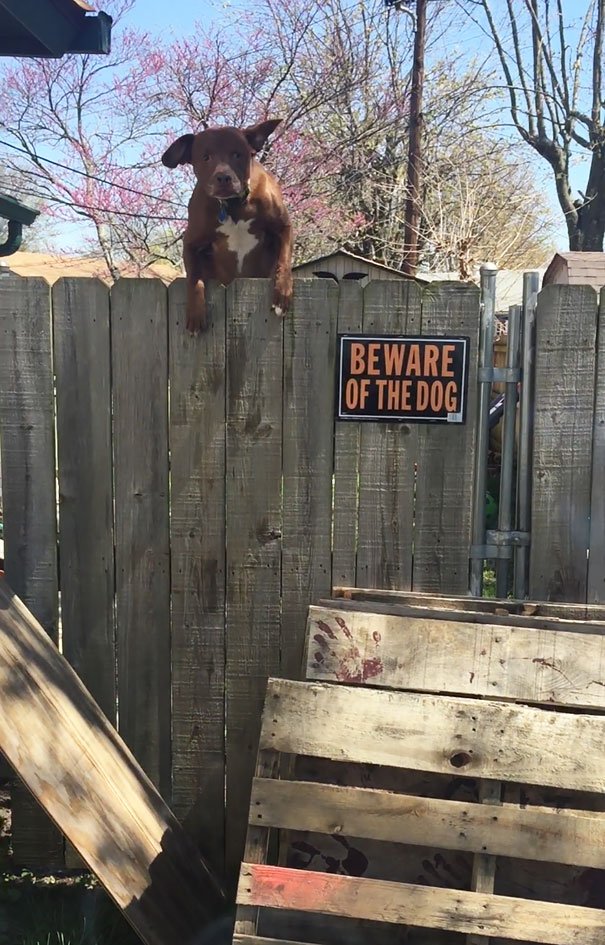 Finally, the most ferocious and wild beast of them all! Once again, we see the correctly set “Beware of Dog” sign on the fence.

The problem here is that the gate is open. Apparently, this Beagle’s owner has allowed him his 15-minute break from Guard Dog Duty. 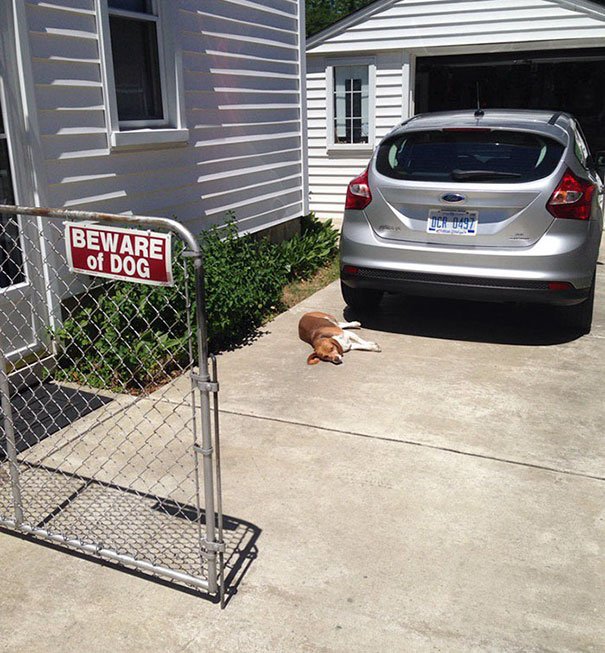