Post-traumatic Stress Disorder is a severe psychological disorder that is a result of a traumatic life event. PTSD is a common disorder in humans and is found in people that have gone through traumatic events like a natural disaster, war, abuse in a relationship, accidents, violent assaults, etc.

But, can a dog have PTSD?

Depression is one of the most common psychological disorders found in dogs, and so is separation anxiety.

In this article, I will answer the question, “Can dogs have PTSD?” in detail.

The Quick Answer: Can Dogs Have PTSD?

It has recently been found that just like people, dogs can also develop PTSD.

The fact is that an estimated 5% of military dogs are known develop the disorder. 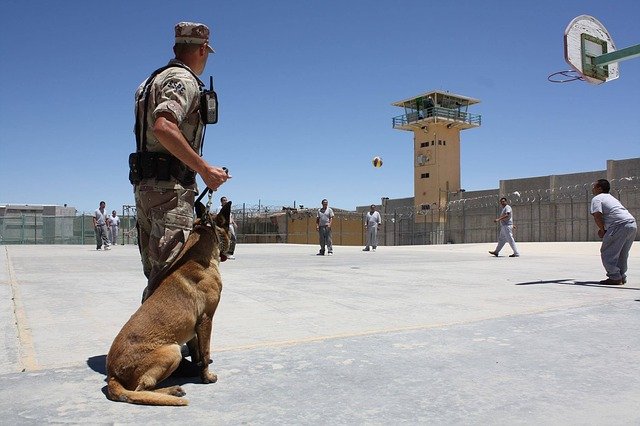 Search and rescue dogs are tasked with finding bodies after disasters, military dogs detect bombs, etc. these situations can be traumatic for a dog and cause him to have PTSD.

However, civilian dogs can also suffer from this disorder.

If a dog has undergone a natural disaster such as Hurricane Katrina, or has been abused, abandoned, neglected, or loses a human caretaker, he can also develop PTSD.

Following are some reasons why dogs suffer from PTSD:

In the next section, I will go through the symptoms of this disorder.

Signs that Your Dog Has PTSD

The signs and symptoms of PTSD vary from dog to dog. While one dog may show a lot of physical symptoms, another may show behavioral ones.

RELATED:  How Much Does A Cane Corso Cost

Each dog has a unique way of reacting to a stressful situation. Anxiety disorders and PTSD have similar symptoms in dogs so; it isn’t always easy to tell the difference between the two.

Following are the signs of separation anxiety and PTSD:

​A dog suffering from PTSD may show the following signs of stress:

​Some other symptoms that hint PTSD:

One of the most common characteristics of PTSD is that the dog re-experiences the original trauma.

Each time your dog responds to stress, various neurochemicals and hormones are released into your dog’s bloodstream.

This causes oxidative stress that may even result in brain damage.

Is PTSD Common in Pet or Civilian Dogs?

Post-traumatic stress disorder in dogs is much more common than people realize. People tend to believe that it is common for military dogs to detect bombs and search and rescue dogs. However, that’s not true at all.

Deeply stressful events can have long-lasting negative effects on your dog’s learning and brain plasticity.

Dogs that have suffered physical or emotional abuse by their trainers or owners show signs of PTSD.

Dogs who suffered from serious illness and had to be kept in a kennel or at the vet’s office for a long time also show the symptoms.

Dogs attacked by other dogs, exposed to violence and physical trauma, or any other stressful life event are all prone to PTSD.

But, not all dogs experience stress in the same way and have the same symptoms or reactions.

While some dogs are more sensitive than the others, and get deeply affected by the negative events and have a severe reaction.

Dogs can also develop some symptoms that are similar to those that humans who suffer from PTSD experience.

Summing Up: Can Dogs Have PTSD?

Yes, dogs can have PTSD like humans do and do suffer after living through a traumatic life event. The signs and symptoms of PTSD vary from dog to dog. While one dog may show a lot of physical symptoms, another may show behavioral ones.

Each dog has a unique way of reacting to a stressful situation.

Post-traumatic stress disorder is seen in police and military service dogs, dogs that have been abused, lost their caretaker or gone through a natural disaster.

Following are the signs of this stress commonly seen:

​Dogs that have suffered physical or emotional abuse by their trainers or owners show, attacked by other dogs, exposed to violence and physical trauma, etc. signs of PTSD.

Post Traumatic Stress Disorder needs to be treated so that the dog can live a happy and healthy life.

I hope this article is helpful in answering the question, can dogs have PTSD.